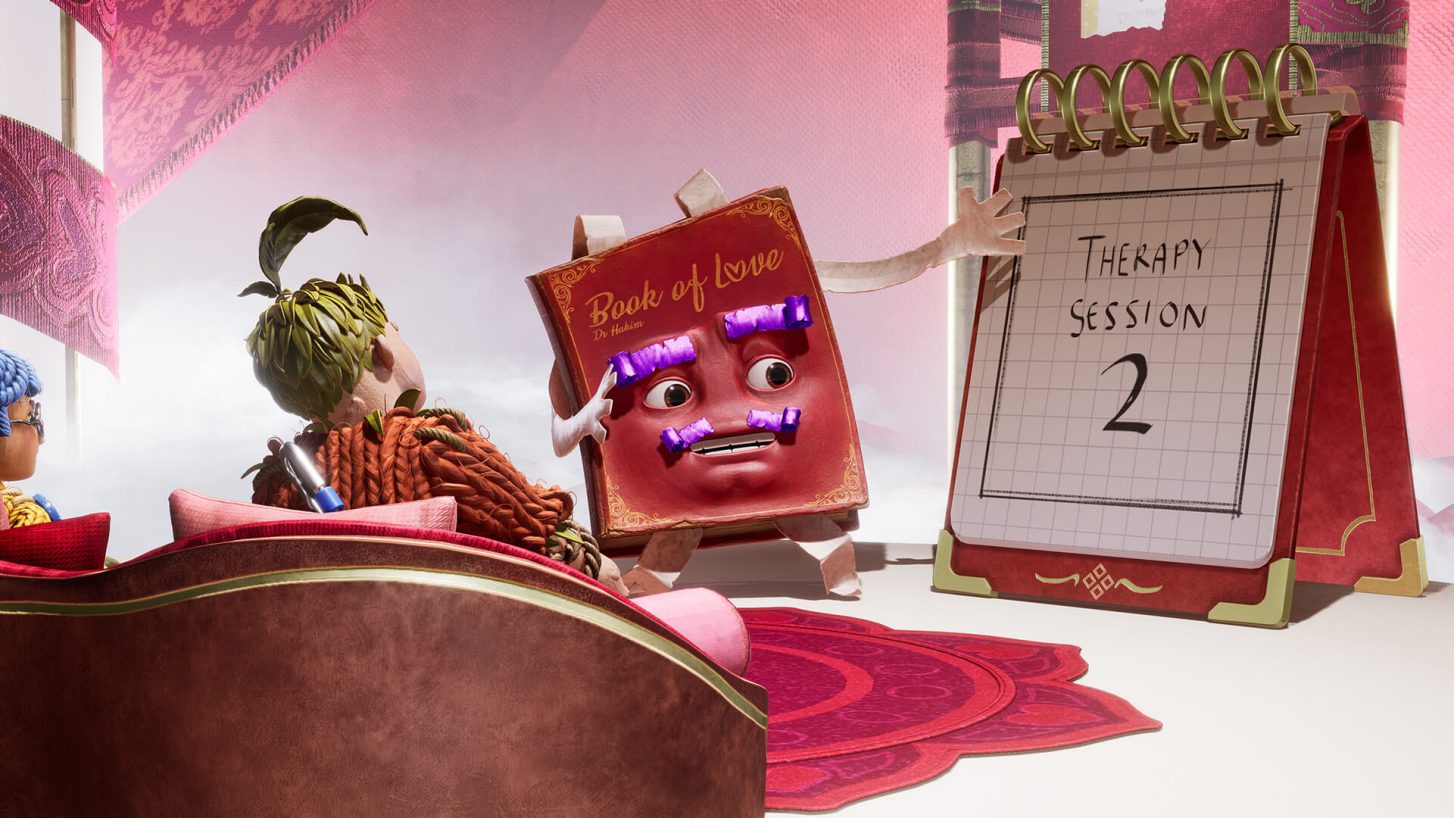 Want to fly on a fidget spinner? Take a ride inside a kaleidoscope? How about fight an army of squirrels, Street Fighter-style? All of this and so, so much more is what you’ll find in the game It Takes Two. This platform, co-op game is the perfect adventure for friends, couples, and family.

It Takes Two is an innovative, platformer game that feels like a blend of Honey, We Shrunk Ourselves meets Inside Out. It truly is a visually stunning game that has a story with a message rich in metaphors.

I played the game with my husband and it was such a fun and meaningful experience that my therapist brain began to imagine all the ways this game could be incorporated into a marriage and family therapy session.

The game centers around May and Cody, a couple on the brink of divorce. Through a magical spell cast by their daughter Rose, they are transported into two of Rose’s miniature dolls. They must work together to survive and find a way to return to their bodies. As the story unfolds, players meet The Book of Love (Dr. Hakim), a talking therapy book/marriage counselor who helps May and Cody learn to love each other and themselves again.

The game requires two players to play together at all times. You can either play with a second player next to you with another controller (local co-op) or you can play the game remotely with a friend (online co-op). If you play local co-op, the game splits into two screens which allows both players to see their partner’s perspective. In each level players are given unique strengths and tools that must be used together to progress in the game. But for the competitive gamers out there, it’s not all collaboration. There are plenty of opportunities for friendly competition in the 25 mini games found throughout the game.

My husband and I describe the game as a Pixar movie you can play. It’s a game that really highlighted our personality differences and illuminated our strengths. We laughed, I may have cried, and we made it through the game supporting one another as we have in the 14 years of our marriage (though nothing could have prepared us for the scene with the stuffed elephant named Cutie…you’ll have to play it and feel free to report back to me if you need to process it).

But you don’t have to be in a relationship or married to enjoy the game. I reached out to the Geek Therapy Community Facebook group and asked colleagues to share their experiences of the game. Many shared that they had played the game with their friends, children, and even people they had only known through social media. Steven Wishanski, a school social worker, shared, “I played with a friend and we had a blast. The game is so good at scaffolding that teamwork and cooperation skill.” Lorran Garrison, a school psychologist and co-founder of Little Brainstorm, played with someone she had never met before and shared it was a quick way to get to know them and learn how to work together.

Several colleagues discussed playing the game with their children. Of course, much of the marriage metaphors may go over the head of a child, there is no denying that the game provides opportunities for players to engage in co-regulation, problem solving, teamwork, and elicits a sense of childlike wonder. Caregivers and their children can enjoy snowball fights together, drawing on a giant Etch-a-Sketch, walking in anti-gravity boots, discovering a variety of minigames throughout the levels, and plenty of Easter eggs and nods to games like Dance Dance Revolution, Diablo, and Street Fighter. It’s a game that recaptures childhood magic and just gives you permission to play.

How to Play and the Friend’s Pass

The game can be played on: PlayStation 4, PlayStation 5, Windows PC, Xbox One, and Xbox Series X/S (it allows cross-gen but not cross-platform play, read here to learn more). You can invite a friend who does not own the game to join the game for FREE with a Friend’s Pass. You automatically are granted access to a Friend’s Pass when you purchase the game. The first chapter of the game is also free to play if you or your partner don’t own the game. You can learn more here.

Using the Game in Therapy

There are many metaphors woven throughout the game mechanics. The Book of Love transports May and Cody into settings or items from the couple’s life. It challenges them to explore something they’ve either lost in their relationship or that they’ve lost in themselves (time, attraction, and passion).

I’ve listed some examples below which may be relevant topics to consider if you are working with a couple. I recommend assigning the game as homework (there are 7 chapters in the game and several mini chapters within each main chapter) and processing in session. Some possible questions and topics to explore:

Time (The Cuckoo Clock): Cody and May are transported into a cuckoo clock, a metaphor that speaks to the lack of time they afforded each other during their marriage. Cody gains the ability to turn back time and May gains the ability to duplicate herself. To get through the level, they must traverse the world of grinding gears and put back together the shattered (heart shaped) components of the clock. This was a chapter that explored themes of being present in the now, time management, not feeling seen or heard, work-life balance, feeling in sync vs. out of sync.

Attraction (Two Halves of a Magnet): One of my favorite chapters of the game takes place in the snow globe. It represents a time when May and Cody’s relationship was alive and fun. The Book of Love offers them each half of a magnet which will help them rediscover the attraction they once felt for each other. This chapter explored showing appreciation to our loved ones, rebuilding a relationship, exploring the idea of “opposites attract.”

Passion (A Plant Named Joy): We learn that Cody’s passion is his garden. However, it’s been neglected and what is left of it can only be described as a scene from Plants vs Zombies. It’s up to May and Cody to destroy the poison that has overtaken the garden. This was a chapter that explored themes of neglect, the importance of nurturing and growing one’s passion, encouraging and supporting your partner’s interests, and never giving up on your dreams.

In the final chapter we explore May’s passion. The Book of Love poignantly states, “when you give up your passion, you give up a part of yourself.”

This is a game that captures the interpersonal dynamics between two people. Throughout May and Cody’s journey we watch their frustration and resentment for each other turn into love and understanding for one another. Many games have addressed topics like depression and grief, but It Takes Two may be the first game that tackles the topic of mending a broken relationship.

No game can truly tackle the complexities of a relationship, but this game at least lends itself to opportunities for players to celebrate their strengths and embrace overcoming challenges together. Maria Diego, a licensed marriage and family therapist and owner of A New Hope Therapy Center, played the game with her husband and commented that it provided an opportunity for both of them to better express their gratitude for each other. A beautiful reminder to look at our loved ones as though it is the first time we are seeing them.

I certainly appreciated my partner's patience and ability to co-regulate with me during moments in which I became frustrated with the game. It's worth noting that the game is very forgiving to novices in that if one of you dies, you will respawn close enough that you will not interrupt your partner’s game play and will not have to be sent too far back in the game.

Other Ways to Play

Because May and Cody’s abilities differ, players can play the game again as the other character and discuss how the experience was different. If you want to fully challenge yourself, players can switch controllers mid challenge to experience the different game mechanics. It’s a great assessment on frustration tolerance, problem solving, communication styles, and a lesson on empathy. After completing the game, players can complete the minigames they may have missed and revisit the games they enjoyed.

A gripe I often have with video games is that they still have a ways to go when it comes to representation in characters. It Takes Two falls into the typical heteronormative trap. Hazlelight Studios should explore including the option to customize characters and options to choose the same gender. Also, The Book of Love (Dr. Hakim) is an incredibly cliched minority character. I cringed whenever he popped up on the screen. I did appreciate that the game did not center on an outdated view of gender roles within May and Cody’s relationship. May is a professional engineer while Cody is a stay-at-home dad. I do hope we see more of this game and improvements along the way (ahem, feel free to call me Hazlelight Studios, I have some suggestions).

The world is magical and so detailed that half the fun lies in exploration. From jumping in the mother of all pillow forts to planet hopping, this game fulfills those childhood daydreams we all had. So, grab a partner and embark on the journey of It Takes Two, because… we’re better together.

Back to Resources Page